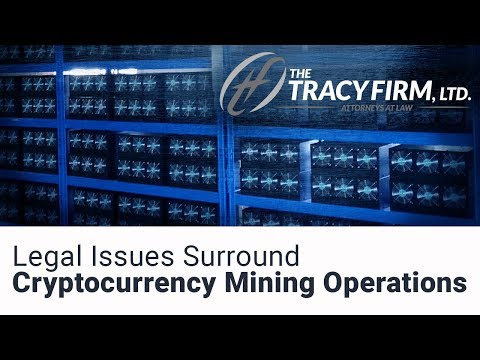 So I was asked today in regards to the Bitcoin mining operation, what are the legal applications and legal concerns that you need, if you wanted to start a mining application. So just thinking about what a mining operation really is is that you’re solving these complex algorithms. It’s all dependent on your computing power. And effectively all that’s happening from a technical standpoint is you are adding records to the blockchain, and it’s quite a big [inaudible 00:00:43] to get yourself into a cryptocurrency.

From that perspective, there’s inherently nothing wrong with it. Cryptocurrency is property in some places. And some places it’s commodity. Bitcoin’s commodity here in the United States. So it’s not inherently the process by itself. There really isn’t many legal implications. I would say if there are issues, such like as places like Iceland where it’s illegal to convert the local currency to Bitcoin. Or places like Russia where it’s just banned.

Now, if you’re going to start a mining operation for purposes of raising money, and then developing that operation, obviously Securities Laws could be applied. Even maybe Commodities Laws, depending on what you’re mining. Obviously you’re going to set that up much like you would a hedge fund, where you have the mining operation and the specific investments and offers a kind of return. And in those cases you’re most likely going to have to follow Regulation D and issue some sort of partnership interest and go through the whole [inaudible 00:02:01] of fund 504, 505, or 506 of Reg D, which relates to the amount of money that you can raise, how you can raise that money. And the whole accredited, non accredited investment.

Because if you’re going to do a 505, you’re stuck at $5 million max raised, and you can sell to only 35 unaccredited investors, whereas if you do a 506 which is any amount of money, you can’t sell to non accredited. So you have to consider that if you’re doing a mining operation, it’s not like an ICO where the ICO, we can define that token being sold as not meeting security, being outside the ambient of Securities Laws.

This is decided when you’re talking about mining. It’s decidedly it’s own enterprise. It’s the entity that is controlling the mining is also the one that’s soliciting the investment. The investment would undoubtedly have to be some kind of common stock partnership interest. And vice versa. So, that’s definitely something to consider.

Another thing to consider, and there’s really a whole law about this, is that the CFTC, the Commodity Future Trade Commissions come out and declared, and did it some years ago now, that Bit coin is a commodity. So if you are in fact doing your Bit Coin mining operation, the question becomes are you structuring a hedge fund of sorts, or entity of sorts? Or is that more of a commodity? And do you need licensure as a commodity trading device? I think where this falls apart is the CFTC has never defined Bit Coin to be a Futures Contract, or a swap, or some sort of currency option.

So, while sort of in a long term scale said Bit coin is a cryptocurrency, it hasn’t actually defined what type of … I’m sorry, Bit coin as a commodity, the CFTC hasn’t defined what type of commodity it really is. So there’s this vast, vast hole that it really needs to be addressed. It’s not necessarily going to be addressed in the context of a mining operation. Likely to look at it as sort of the Bit coin ETF, or Bit coin child hedge fund. But it’s something they need to consider, because you may have some securities obligations, but there may be an implication regarding the Commodities Act. If you’re going to be operating [inaudible 00:04:40] which is a commodity.