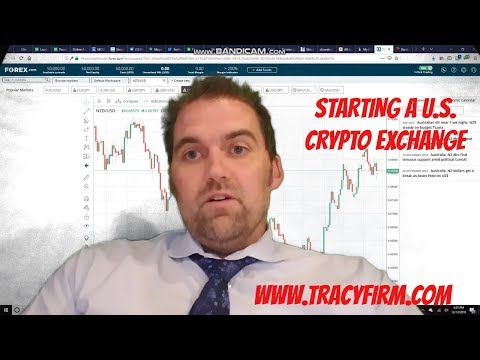 Money Service Business consultant Adam S. Tracy discusses the relative merits of starting a cryptocurrency exchange in the United States as well as the legalities involved.

So would I start a crypto exchange in the US, and how would I go about doing it? And I get that question a lot. And there was an article in Cointelegraph that detailed the hesitancy of most exchanges to operate in the United States. And I think recent pronouncements have actually made it far more feasible and far more attractive to do it. One, just from a business perspective, over 50% of the world’s crypto wealth is centered in the United States. So you’d be kind of crazy to avoid half of your clientele, more than half of your clientele if you’re opening a business in a global economy, number one. Number two, to have a non-fiat crypto exchange simply involves registering as a money service business, right? That’s all that it really entails from a legal perspective. Obviously you have to incorporate, incorporate in Wyoming. It costs $100, costs $100, plus maybe $125 for the registration. $125. And register as a money service business, right? With FinCEN, which again, and this has been bantered about a lot with the Facebook LIBOR discussion. They’ve become licensed as a money service business.

It’s not a license, right? Money service business, as the name would indicate, is a registration. It’s a voluntary registration. What you’re doing by registering as an MSP is voluntarily making your entity subject to the regulations included in the Bank Secrecy Act, which are your AML KYC requirements, and your requirements to file SARS reports, suspicious activity reports, STRs, suspicious transaction reports, things of that nature, right? Which overwhelmingly, those reports are filed with respect to cash, physical cash transactions. But if you’re simply acting as an exchanger, an exchanger of convertible, virtual currency, exactly from the FinCEN rags, you only need an MSP to operate. You only need an MSP to operate. So it’s actually very simple. Now you have the secondary regulatory concern, which is the SEC and CFTC to a lesser extent. And so the question is, are you trading securities, and if you’re allowing securities to be traded on your platform, are you acting as an unlicensed national securities exchange? Section six of the securities exchange act of 1934, right?

If you’re trading an ICO token, definitely an STO token, and you’re facilitating those trades. You were acting as an unlicensed national security exchange, of which there are only a handful in the United States to begin with. An exemption or exception to that rule is an alternative trading system, which requires you to be a broker/dealer, which I’ve kind of talked about here before, and that is a whole other thing. But to trade Bitcoin, to trade Ethereum, to trade Litecoin, those are clearly not securities. The commissioner of the SEC, albeit in offhand remarks, has said that Bitcoin is not a security. Now the CFTC has said Bitcoin is a commodity, but they’ve never enforced it as such. That’s a whole other issue. But the reality is, if you can create an exchange and simply register, go through the machinations of registering as an MSP, which isn’t terribly difficult to do, and then have adequate AML controls in place, most of which you can buy, right? You can effectively vend in.

Starting a cryptocurrency exchange in the United States shouldn’t be a problem. It shouldn’t be a problem. And it shouldn’t be an overly expensive problem. Now, if you want to take fiat, that’s a whole other level. When you’re going to take fiat as a medium… excuse me… As a medium of exchange, then you trigger state law. Okay? And unfortunately there’s 50 states, and those 50 states have money transmitter licenses that you have to apply for. And so to operate in those states and accept fiat currency as a trading pair, or to accept fiat currency deposits, you would in turn have to become a money transmitter in that state, which can be costly. It can be costly because one, it’s a lot of work and you’re typically going to hire an attorney to do it. Two, because each state requires a bond to operate, right?

It requires a fidelity bond or a surety bond to operate as a money transmitter. And these money transmitter laws aren’t designed for crypto, with the exception of the bit license in New York. They’re not designed for crypto. They’re designed for people who have Western Union in their bodega, right. Or people who want to do peer to peer payment transfer system, stuff like that. They’re not designed for crypto exchanges, but that’s the law you fall under. If you want to do a crypto exchange that accepts fiat in the US. And there’s nothing inordinately difficult to do it. It’s just time consuming, and it can be costly. It can cost about a $100,000 to $150,000 to do it. But on a grand scale, does it pan out? I would assume the ROI is there. Right? I would assume the ROI is there. Coinbase exists, and you can bet it’s really just a function of buying and selling four different pairs, there’s really nothing to it if you think about it.

So you know, but to adopt sort of the Bittrex model where you’re just going crypto to crypto, it’s really just a matter of being an MSP, which is an exceedingly… I don’t want to say simple, but it’s not an overly complicated process. So the majority of… And this also relates to what tokens and what coins you’re going to allow for trading on your currency. But the reality is most ICO tokens don’t really trade that well. And once ICO tokens are in the marketplace, the question becomes, are they really securities to begin with? Right? Are they still securities, or is it just in the offering itself?

So, point on point, starting a cryptocurrency exchange in the United States doesn’t have to be that hard and it’s too large a market, in my opinion, to really ignore considering what you have to put in to legally operate. So if you have questions, if you’re looking to set up an exchange in the US, or have questions concerning how to do it or how to go about it, feel free to hit me up, adam@adamtracy.io. Happy to answer those questions, and I’ll talk to you later.