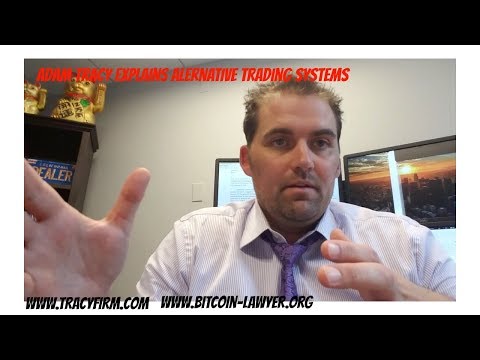 So now everybody is wondering or wanting to go the direction of the security token, which makes a lot of sense, if only because in the United States you’re in a bit of a gray area. You know? Are there such things as utility tokens? And a lot of ICO issuers are taking what you consider to be the safe route and saying well, okay, we’re just going to call it a security. And I’ve talked about reggae and ICOs and security token offerings in the past, and why those do and don’t make sense, but the biggest issue is the secondary market, right? Any of the prevailing crypto exchanges, especially the ones the United States — Binance, Bittrex, Coinbase, etc. — aren’t going to list for trading a security token. And the reason why they’re not going to is that they’re not licensed National Securities Exchanges. So to the extent that any of them did list a security token for trading, they could conceivably run afoul of the exchange act because they would be facilitating the exchange of Securities without the proper licensure. So the question becomes can one become a licensed National Securities Exchange? And that’s difficult, right? That’s difficult. There’s only a few of them in the United States, and you’ve heard of them — Nasdaq, New York Stock Exchange, and so forth.

So the question becomes are there alternatives, and the primary, if not only alternative, is what’s called an alternative trading system. Or, you know, what’s called a multilateral trading facility in Europe or a call network or a electronic communication network in different places. But the requirements to become an alternative trading system, which is exempt from the requirement that you become a license National Securities Exchange, is that you become a broker-dealer first, right? So typically in the traditional securities world, ATS’s operate sort of in the dark pool type market, where you have large institutional investors trading large blocks between other institutional investors. But that requires you to become a broker-dealer and to become a licensed broker dealer, you have to go through Finrun — you can buy broker-dealers, and obtain the licensure, and operate and so on and so forth, but it’s not an easy road to hoe, right? It’s much more likely that you would be able to become an alternative trading system for crypto than you would a licensed National Securities Exchange, but it’s still fraught with risk, expense, and obviously time to do these sort of things. And, the other thing to think about is, you know, I’ve seen and you’ve coinbased it, and you’ll see others that are trying to become these alternative trading systems. Those aren’t retail platforms, right? Those are institutional platforms. Those are platforms for large block trades to effectively clear. And the reason that a lot of them exist is because they want to clear large trades without the general market knowing because those show off market. So in the traditional securities world, Apple computer can be trading back and forth, but on an ATS, I could go sell, you know, 25 million worth of Apple stock and it won’t necessarily affect the price as its quoted on Nasdaq, right? That’s because it’s off the books. So, you know, the solution for a security token for liquidity is that it has to be either a licensed National Securities Exchange or an ATS, but the reality is that ATS may not provide access for retail investors. So, if you’re going to be an ICO issuer, and you’re issuing a security token, you can’t necessarily make the promise that any of these ATS’s that are coming on board will — one, ever come on board because they have to go through the process of becoming a broker-dealer, and then file a form ATS with the SEC, but you can never guarantee that a retail investor would gain access to it. So, you kind of go back to what I’ve, you know, opined here before is that reality is with the security token, you’re really kind of limited to certain like offshore exchanges because, you know, then the SEC sort of opined on that in the in the Dow Token decision. But these offshore exchanges are probably the only venue that you may have for liquidity, right? And so, I go back to my point like with filing a reggae or an S1 with a security token, yeah you have, you know, the legal ability for resale — meaning the token can be legally resold as opposed to being a restricted security, but you have no market. You actually have less market than you would for one, a share of common stock and two, certainly for utility token.

So, you know, an ATS is a great concept, and I think there should be more, but the reality is it doesn’t necessarily guarantee access to retail investors. And it’s definitely plausible that you could start one, and there’s procedures for that. And I’m happy to discuss that with anybody who’s interested, but it doesn’t necessarily mean that your security token is going to have liquidity when these start coming on board which again, I think, you know, with most ICOs the real the value of anything was the liquidity. Right? And if you took an STO, security token offering, and you took a share of stock, a stock offering, and they were the exact same deal, right, and this is just today, if they were the exact same deal promising the exact same returns — one was selling a restricted share of stock, one was selling a restricted security token — in almost every instance, I would advise my clients at least to purchase the shares of stock. Because at least the share of stock has some exit mechanism, right? You can do an IPO, you could list on one of multiple securities exchanges. Whereas, the security token right now doesn’t have that exit. So, it’s actually more liquid than the share of stock, and that sort of goes against what I think has been driving, to a large degree, these ICOs for, you know, now about two years. So it’s an interesting thing to consider if you’re going down the security token road. Not to say that one, you shouldn’t necessarily go down that road or do it the United States could always do it off shore, and two or three rather, you know, you have to consider what the implications of selling what’s an illiquid security really is and how that affects valuation, how that affects your ability to, you know, sort of sell your offering out, right? So if you have any questions, you know informing ATS’s, broker-dealer formation, or security token offerings, hit me up —  Email is at the bottom of this video. Great talking to you, and I will see you soon.