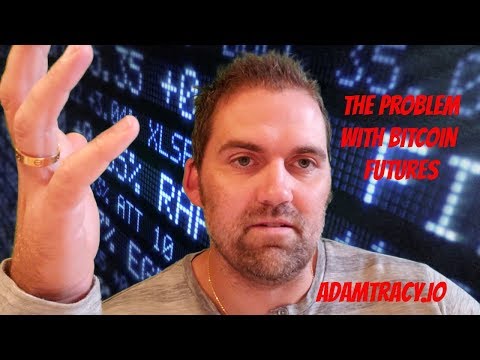 So there’s been a lot of talk about Bitcoin futures, as it relates to, um, LedgerX, and their attempt to have a physically settled futures contract. Uh, right now you have two, as I’ve talked about before, that, two futures contracts that you can currently trade. One at, uh, downstairs from me at the Chicago Mercantile Exchange, and another at the, across the street at the Chicago Board Options Exchange. And they’re, they’re similar, but they’re different. The CME contract is based on five Bitcoin, and it’s r- the price is based on what’s called the Bitcoin reference rate, rate. Which is a, an average, a weighted average of the prices of Bitcoin at four exchanges: itBit, Kraken, Bitstamp, and GDAX. Whereas the CBOE contract is based on the price at Gemini Exchange.

And, uh, the similarity which is really relevant to a lot of this, is the price limits, right. Trading would, will be halted in either contract, at either exchange, when the price difference, versus the closing price of the day prior, exceeds 20% going either direction, right, up or down. So it leads to a number of problems, right, and there’s number of problems structurally how these things work, and it remains to be seen whether a physically contract would actually correct that. And I think it, it kind of doesn’t, right.

First, what, what you have is these price limitations, right, that cuts into profit. Okay. If I’m, if I’m long, if I bought a Bitcoin future, and the price of Bitcoin goes up over 20% in a day, which is common, and it’s happened before going down for that matter, I can’t participate in that upward appreciation above 20%, right. so inherently I’m limited, right, inherently I’m going to not, either be able to recoup my gains, or minimize my loss, in the sense that the price has gone down over 20%. So number one, there’s, there’s inherently a problem, but that’s systemic in a sense to Bitcoin, because of the wild fluctuations that y- you see in Bitcoin.

And that’s to point number two. There’s systemic risk that the exchanges now face, or could face because of the Bitcoin futures. Because you can’t participate in, let’s say, appreciation, let’s use that example, of greater than 20%, right, you have an inherent issue, because it can cause a sell-off, right. If I can’t, as a trader, and I’m owning just the futures products, if I can’t participate in that appreciation, I’m going to sell. Or vice versa, if the product’s going down, I’m going to sell, and it’s going to cause a massive sell-off. And in theory it could crash the entire market, because again, it doesn’t float, it doesn’t float with the actual price of Bitcoin. whereas like the price of, let’s say, other futures, like corn, or something boring, like oil, gasoline, you know, any of these things, you know, hogs, right, there all Futures contracts, they’re established markets, you don’t see price swings like that, right. But, they’re, the price limitations aren’t in effect, you never see 20%. But the price limitations aren’t in effect, and it never comes into play, but with Bitcoin it comes into play all the time.

Third issue is that the exchanges upon which these futures, the price of these futures are based, are inherently unstable. How many times have they crashed? How many times have they been subject to price manipulation? How many times has there been some sort of technical issue, where you’re not getting best price? It happens all the time. It happens all the time, and then we’re basing a regulated product on these unregulated exchanges, which have no more oversight than, what, maybe a state money transmitter license. Right, and that just doesn’t make a great deal of sense, right. So, it’s, it’s inherently, inherently flawed, because of its pricing model, to, to begin with, right. And how you do that, you know, is probably to have some sort of regulated exchange, that’s reg-regulated by the CFTC. But the question becomes, will you ever get there? And what direction are we going? And what is Bitcoin? And all these, all these kinda things.

And then finally, it’s volatility, right. Bitcoin is already wildly volatile, and as I’ve mentioned before, it’s wildly volatile because it’s not really pegged to anything, right. It’s not really a supply and demand issue, right. It sort of loosely fluctuates. If you take they dollar for an example, like the dollar goes up and down based on interest rates, trade imbalances, a whole host of economic factors. Well we haven’t really got to the point to really decipher what some of these economic factors that may effect Bitcoin are.

And typically futures draw in the speculators, right. Futures are very, it’s a, as an asset class it’s extremely risky, but it draws in the speculators, right. It’s typically the land of the speculators, and, and the people that are going for the big scores. Whereas Bitcoin in and of itself is all speculation, right. So you’re creating a product that typically takes the speculators out of the spot market, right, because they’re in the Futures market, they’re not in the actual market for oil, right. They’re, the speculatives go and buy the futures, ’cause they don’t want the actual underlying commodity. Well here, it’s different. The speculator’s already in the spot market, and so now you’re creating a product that inherently, a financial product that inherently attracts the speculators, right. So all you’re doing is increasing volatility, you’re increasing volatility to some, the nteenth degree, and again we don’t know why, right. There’s no financial underpinnings as to why Bitcoin really goes up and down. Like you can make these comparisons, that it goes up and down with, with the dollar, or with like price of gold, or with things, but none of these things have been sort of, have borne out, right. And so you’re taking an inherently risky speculative asset, Bitcoin, and then you’re creating an albeit regulated product, but an even riskier proposition in the Bitcoin future.

So there’s four big problems, right, and I’ve just kind of gone over them. And I think what LedgerX is doing, and the physically settled Bitcoin could help, but it’s not gonna solve these problems. Those problems are systemic, and they relate to Bitcoin, you know, the futures contracts, great, in the sense that if you’re trading Bitcoin, and you know how to, you know, accurately use the product, right, use the Bitcoin future, you can minimize loss, right. That’s just the concept of hedging. But the problem is that these aren’t structured properly, and the underlying spot product, Bitcoin, in and of itself, is so speculative, and unwieldy that it really makes it an almost impossible to, to sort of take advantage of what otherwise would be a great concept.

So that’s my take, I think LedgerX is going in the right direction, right, in the sense that you could settle in physical Bitcoin, it’ll take some of the volatility out, but it’s not going to correct these problems I have here. So if you’re in the market, and you’re looking to, to dabble in Bitcoin futures, have any questions, be sure to check me out. Uh, contact me any time, adam@adamtracy.io firm.com, and I will, uh talk to you later.