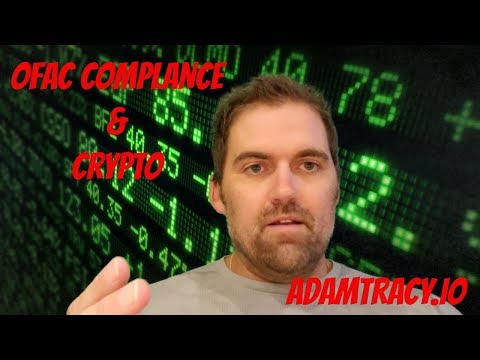 So, question that I get a lot is, do I need to do KYC, AML with respect to an initial coin offering, or security token offering, or initial exchange offering? Some kind of token offering. And there’s a huge emphasis, right, on that. And the question of whether or not you have to run KYC. I think as a general rule, you should. What doesn’t get enough attention is your re- your responsibilities under OFAC, the Office of Foreign Asset Control in the United States. OFAC administers the sanctions programs that the United States has against certain countries, and then groups of individuals, right, primarily terrorists and narco traffickers. And if you are a US resident, US citizen, anywhere in the world, or US entity, irrespective of what you’re doing, you’re subject to OFAC regulation. And that general re- regulation is that you cannot conduct financial transactions and other transactions without exemption with countries, residents of certain countries, or people on what’s called the specially designated nationals list, right, which is a rogues list of whose who in the terrorism and narco trafficking, money laundering world.

And so, no matter what you’re doing, right, even if it’s, you know, import and exporting chewing gum, you’re subject to OFAC regulation and these sanctions programs, right? And the sanctions programs against countries relate to countries like North Korea, Somalia, Iran, Venezuela, so on and so forth. And since Venezuela, speaking of them, launched their own cryptocurrency, there has been an uptick in interest from OFAC, uh, re- regarding cryptocurrencies. Especially because there was a specific warning about individuals who would be inclined to purchase Venezuela’s state sponsored cryptocurrency ’cause that would have been violative of our sanctions program against Venezuela. So, you know, irrespective of what you’re doing, and if you have a true utility token and I’ve spoken about it here before, those do exist, you’ve got no action letters from FCC saying that, you know, there can be something such as utility token, and, you know, you’ve got this blurry line from FinCEN, “Do I have to be a money service business if I’m doing an ICO? Do I not have to be?”

I would contend that you do need to be. It’s probably best practices to run KYC on- on your- your purchasers, your investors either way. But irrespective of whether or not you do that, you’re still subject to OFAC re- regulation. So, to not do KYC, may not be a legal requirement. But it can open the door for civil and, in some cases, criminal penalties from OFAC because you don’t who you’re dealing with, right? Someone from Iran could participate in your ICO. Someone, you know, I mean, you’re not gonna get Somali pirates or North Korean, you know, dictators to probably invest in your ICO. But people use VPNs and do something crazy. And places like Iran, Venezuela, it’s very logical and very plau- plausible that this could occur. Not to mention the fact that, you know, admittedly, and I get the anonymity of cryptocurrency. Like, I’ve been a big proponent of that, and I understand that.

Well, it is used. You know, it- Bitcoin especially is used for money laundering. Like, let’s- let’s just call it what it is. It’s used extensively for money laundering, and all types of cryptocurrency are. So, you know, for someone who was on that specially designated nationals list, to one who get involved in a large scale ICO where there’s a lot of volume, where you could move a lot of money through, it’s not a terribly, you know, remote possibility, right? There’s a lot of people on that list. So, you know, my- my take is this. You’re subject to it no matter if you’re US resident, US citizen, US citizen abroad, US entity, you are subject to OFAC compliance requirements. So, as a precaution, do KYC. Do KYC because at a minimum, maybe you don’t need to actually do KYC, but you need to adhere to the higher standard that OFAC raise it was just sort of a strict liability standard.

So, you know, irrespective of the debate, right? The FinCEN debate of money service business and the requirements of whether or not A- AML, KYC are a part of the- the process. You know, the cost of compliance is so small, right? There’s a lot of good outlets out there that, you know, I’m happy to make referrals to that will do the KYC for you, give you access to the background information that you need, right, at an international scale. So, the cost of compliance is so small compared to the cost of non-compliance, right? So, I think in general, OFAC compliance is something that is widely ignored but majorly important, and something that, you know, doing ICOs, STOs, IEOs, whatever you’re doing, um, in the crypto space, you really need to take a look at. Espe- especially if you’re obviously a US resident or citizen, or US- US entity. So, check me out, happy to, uh, dive deeper on the, uh, issue of OFAC compliance. Check me out, A- AdamTracy, T-R-A-C-Y.io, and I’ll, uh, talk to you later.