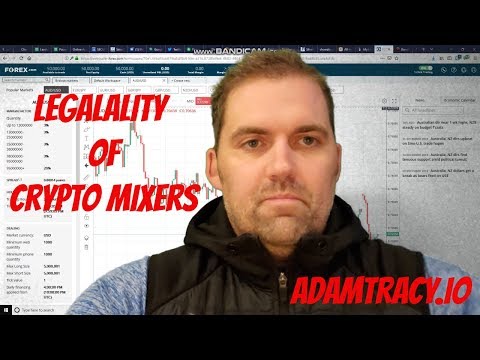 So, one of the biggest misconceptions with crypto, especially in the press, is that it’s anonymous, and that the transactions are anonymous. They’re not anonymous. They’re pseudo-anonymous, right? If you… The majority of transactions initiated in the crypto space come from regulated exchanges or wallet services, right, which are KYC dependent and have, you know, somewhat robust KYC programs. So, they’re pseudo-anonymous because, ultimately, that source, that exchange, that wallet service could seemingly identify who owns such-and-such wallet and see transactions going in or out, right? So, it’s pseudo-anonymous in so much that one can’t necessarily immediately identify the owner of a particular wallet, but with a subpoena for instance, they could, right?

So, that’s where mixers come in. And, you know, mixers offer that anonymity that hardcore crypto acolytes demand, or believe should be at the center of crypto. And so, the question is, what are the legalities surrounding Bitcoin and crypto mixers? And you saw over the summer, that BestMixer.io got shut down in Europe by Danish authorities for money laundering. And it’s a real concern if you’re going to start a mixing service. First of all, you are an exchange, right? You’re a crypto exchange. Even though you’re aggregating transactions for purposes of sending them to the person who initiated the transaction, right? You’re still acting as a money transmitter at a US federal level. So, it would require, at a minimum, a money service business registration, right? That’s number one.

Yeah. In- in so much that fiat isn’t typically involved via currency, you probably wouldn’t have any state law money transmitter licensure implications. But you’re definitely a crypto type exchange that would require a registration as a money service business. That’s number one. Number two, if you’re not going to be a money service business, and you’re gonna run a mixer ser- service that doesn’t do KYC, you’ve got a problem because being the money service business requires you to do AML KYC. And so, if you’re going to run a unregistered mixer service, or do it like offshore, um, one, you could run a file of FinCEN in the United States if you’re going to cater to US residents. But you could also be aiding and abetting, um, money laundering if the wrong people use your service, right? ‘Cause you don’t know.

You ultimately would not know if you’re not going to do KYC, and a lot of people who’ve approached me, contacts from a certain mixing services, things like that, it’s a tough sell. Because even if you go offshore with your service, it’s who you cater to, right? Remember, it’s not… Going offshore isn’t this panacea that allows you to do everything. It’s a panacea from the perspective of you may not wanna come back to the United States forever. Or you may not wanna pay taxes on money that you keep offshore. But at low tax rates, assuming you’re in a tax haven, but it doesn’t preclude you or prevent you from having to comply with the laws of the nations that you operate in, right? It’s outward looking, not inward looking. Okay?

There’s some exceptions to that, you know, part of the com- British Common Law, things like that in nature, which you can get into. But just having a US centric sort of discussion about it, it’s not necessarily going to preclude you from any sort of legal liabilities. So, you have to really consider whether being an MSB defeats the purpose of having the mixer, or if you’re going to have a mixer that’s not registered as an MSB, is it worth the risk of catering to US residents knowing that your violation arguably of the law, right? So, that’s- that’s obviously, you know, your- your concern there. But there’s a point and there’s a purpose to it. And again, I think the hardcore crypto, you know, purists wanna see that anonymity. But that anonymity comes at a high cost if you’re not willing to comply with the laws and regulations of wherever you’re at.

Now, one alternative, which me at third point, is, you know, to obtain a license and like a Seychelles, or Malta, something like that, to run a mixer legally, which carries with it certain AML, KYC requirements. But you have nations that are more protective of how that KYC and AML is shared. Right? So, that may be an alternative to- to pursue. I can… I’ll talk about that in a future about Malta and Gibraltar, and some of these more obscure places and how they share information, how their licenses can be valuable. Um, same could be said for like the Bermuda. But it’s, um, decidedly very risky endeavor because just from the perspective of being in the US, you are a money service business. Like, registration would absolutely be required.

If they’re requiring money service business registration for ICOs, and that’s just the mirror exchange of, you know, basically selling something, right, a token for currency or a token for other crypto. And on the other end of the spectrum, you have your full blown cryptocurrency exchanges. Well, that middle ground is that mixer, which even though it’s arguably just the user recycling, and then combining the inputs of other users’ transactions to send out the thing. It’s not going to escape money service business registration requirements. So, it’s an interesting concept and I get, you know, where people want to come with these, and I understand why people want to see this total anonymity across the crypto landscape.

But I think you’re gonna find, especially after like the best mixer, um, incident, how that site was seized, that- that comes at a very steep price if you’re not willing to operate completely offshore, domicile yourself completely offshore, and assume you’re never going to step foot in certain nations again. Right? Because that’s- that’s the cost. So, uh, interesting- interesting questions all around. But valuable service to a lot of people. So, you know, you have to weight the pros and cons I suppose. But you have any questions, definitely hit me up. Adam@AdamTracy, T-R-A-C-Y.io, and I will talk to you soon.