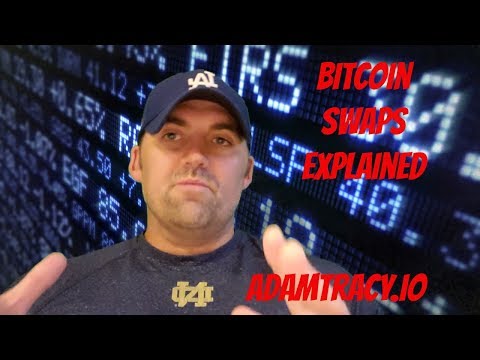 So, Bitcoin, the Futures are gaining acceptance. You start to see, starting to see the volume for Bitcoin Futures go up. And you see a lot more groups such as, like, LedgerX attempting to become fervor participants in Bitcoin Futures and Bitcoin commodities. But one commodity that is a huge part of the commodities market, which isn’t spoken about often enough I think, is Bitcoin swaps, right? And why those don’t exist because they’re a hyper effective tool for hedging, which allows the individual, allows an individual to participate and take a long position in a commodity without actually owning the commodity. Whereas like with the Future, you’re owning the Future delivery of a commodity, right? You may not own it, but you will own it at expiration unless you trade out of the position. Whereas the swap allows you to take the- the upside, right, of a commodity, uh, for a, you know, relatively small fee, and participate in the appreciation if there is any.

So, how will they work? Right? And there’s multiple types of swaps, okay? A Bitcoin swap would probably take, or would have to take the commodity for interest form of swap. Right? And in that case, you have the fixed pay receiver and you have the fixed pay payer, okay? And the fixed pay receiver in this case would be for instance the person owning one Bitcoin, right? And let’s say one Bitcoin is at $1,000. The fixed pay payer would pay some interest based on that price of Bitcoin, that $1,000, typically LIBOR, right, the one that interbank offer rate plus a spread. So, LIBOR is roughly 1.6, something like that plus five. Let’s say LIBOR’s 10, okay? Just for argument’s sake. That’s the spread. So, what would happen in the swap transaction is the fixed rate payer would pay, on the 30 day swap contract, would pay effectively $100, and they would in turn receive from the fixed rate rec- receiver, person receiving the $100, the right to the accumulation or price appreciation that 30 day period.

So, for instance, if Bitcoin again is at $1,000, and during that 30 day period, at the end of the 30 day period, Bitcoin’s gone up to $2,000, the fixed rate payer, the person who has paid the interest of $100, would receive $1,000 back because they’re entitled to receive the appreciation, the price appreciation. If Bitcoin goes down, or Bitcoin doesn’t move, the fixed rate payer receives nothing. But at all times, the owner of the Bitcoin, the fixed rate receiver, receives that $100 as a fee for effectively loaning, right, or selling the Future right to receive to appreciation of their Bitcoin for that 30 day period or however long the swap goes. The swaps can be a variable periods of time. But economically and functionally, you know, for a Bitcoin, especially a Bitcoin is going to reach an institutional level, having a vibrant swap market is actually very significant, right?

You see a lot of interest rates swaps. You see currency swaps, things of that nature. And I’m not talking about atomic swaps where, you know, like shape shift now that’s where you’re trading Ethereum for Bitcoin, swapping if you’re in [inaudible 00:03:55]. That’s not what we’re- we’re discussing here. This is a regulated financial product, which has a significant impact on the broader Futures and commodities markets because it’s a hedge. It’s an effective hedging tool. And for widespread adoption in the financial community and the, you know, the high level financial community, not just sort of arbitrage traders and at home traders, not there’s anything wrong with that. But it’s a significant piece that’s missing. And we’re relying on Futures, and I think the developments in Bitcoin Futures, especially with, uh, non-cash delivery, right, where the delivery at expiration of the Bitcoin is actually in Bitcoin as opposed to a cash delivery, like you see now with the CBOT and CBOE contracts, is very significant, right?

And it’s- it’s a- it’s a super product when it will come online hopefully soon to effectively hedge positions, large positions in Bitcoin. But a swap actually gives you greater protection because it allows you to hedge against upward appreci- uh, downward appreciation, or upward appreciation depending on what side you’re on. Right? So, it’s, um, a significant developing that I think needs to happen, and there’s a lack of understanding as to how it would happen in the market in my opinion, for whatever that’s worth. But, um, you know, I think that’s something that I know parties are looking at and looking at implementing. But mechanically, in order for the economy of Bitcoin to really to take off and really see true liquidity, not the liquidity that we see now, which, you know, you think it’s liquid, but on par with traditional things or product is really not that liquid. That’s why you see these wide swings. Right?

‘Cause it’s generally a liquid. You need implementation of swaps alongside a vibrant Futures market to truly regulate the market at an institutional level ’cause those are the ones moving the market the most. So, you have questions regarding how Bitcoin swaps operate, how they work, be sure to hit me up. Adam@AdamTracy, T-R-A-C-Y.io, happy to answer any questions that you have. As always, I’ll check you later.