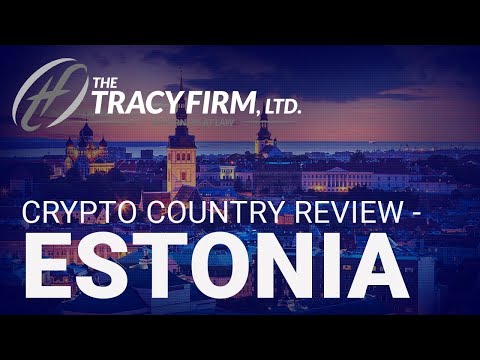 Hey everybody. I wanted to tackle the question of Estonia and the efficacy or popularity of why incorporating your crypto based business there seems to be a key place for why there’s some advantages to it, and quite frankly, I don’t necessarily agree with a great deal of the understanding that’s out there about Estonia.

They’ve obviously made themselves as a country, a very attractive place and they’ve gone to great length to advertise the country as a place to welcome cryptocurrency based investments. And from what I can tell, and what my experience has been, the regulators there are happy to work with you to the extent that you really need their help. The problem is a few things. Number one, Estonia still regulates cryptocurrency exchange, so there’s actually been cryptocurrency exchanges such as BTC.EE which was shut down by the Central Bank of Estonia. So, it’s not that friendly, and when you’re talking about and exchange.

Number two, any transaction in Estonia that’s more than €1,000 requires customer identification, and much like you have in the United States where you’ve got a $10,000 limitation, that’s considerably less, and that applies to cryptocurrency related transactions. So the question is, how do you effectuate that compliance, that compliance runs really low because €1,000 is very small, when you think about the price of one Bitcoin and the actual exchange rate for Euro. So, that’s an issue in and of itself.

Second, a lot of people point to the fact that the securities regulators in Estonia haven’t stated anything with respect to ICO’s, which is cracked, but one, just because they haven’t come to any conclusions doesn’t mean that they won’t. And number two, the laws of the country to which you sell would otherwise apply. So, Estonia is a very small country. In essence, if you wanted to avoid any sort of future securities regulation from Estonia, you just wouldn’t sell to the people within Estonian, which you wouldn’t expect to receive a lot of investment from to begin with, so it doesn’t really matter.

So you’re still dealing with the countries that you’re outwardly soliciting your ICO to. So, the advantage of having it within Estonia is not that great. And finally, the tax laws and the privacy laws aren’t particularly good. You still have a tax burden. The VAT does not apply to cryptocurrency transactions, but it does apply for income tax. They have fairly regular income tax rates. They’re part of the EU, there’s information sharing agreements, there’s a whole host of things. So, when I compare it to an offshore jurisdiction, like Cayman Islands or something like that, I don’t see there to be a real particular advantage.

Now, this sort of digital citizenship that they sell, I understand that, and from what I can tell, there’s some ease of them operating the company remotely, which obviously they’re going to do for most reasons if you are incorporating Estonia, but it’s really not that difficult to do that really anywhere at this day and age. The absence of just having some very, very obscured jurisdiction, which you wouldn’t do anyway may be an issue, but at the end of the day, it’s really not particularly advantageous.

So, when I look at it overall, the friendliness of cryptocurrency in the adage to the government is a positive thing. I think there’s a lot that could be done that isn’t being done. And I think for purposes of right now, especially when you’re considering how, especially ICL’s are outward facing, they’re outward facing to the countries that, in the citizens of the countries that you’re going to solicit, it’s not overly advantageous versus more traditional jurisdictions that have better tax arrangements, better privacy arrangements and the like.

So, that’s my take. I think it’s a bit of marketing. I think it’s a bit of trying to buck the curve in terms of being the first thing there, and it’s generally a pro-business country, but at the same time, the advantages are a bit overstated, from my opinion. So check me out, adam@adamtracy.io. Talk to you later.